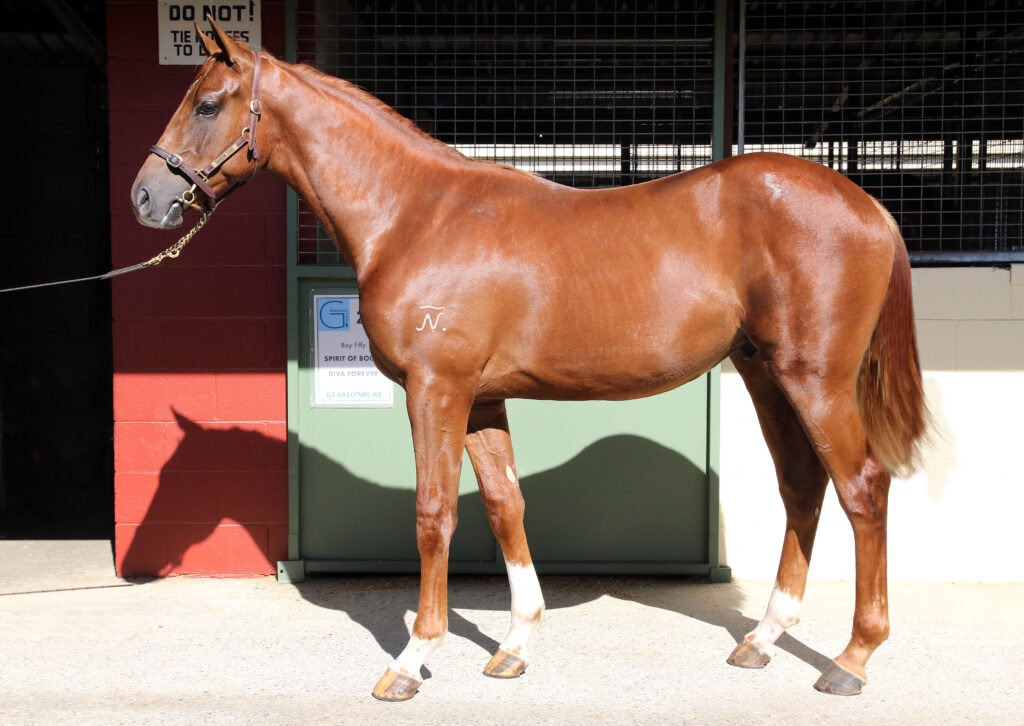 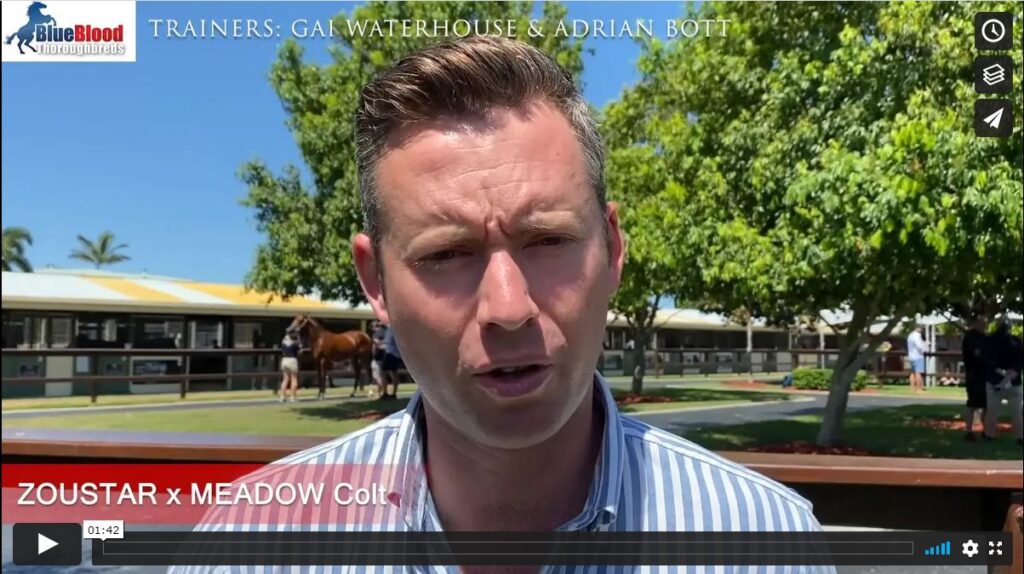 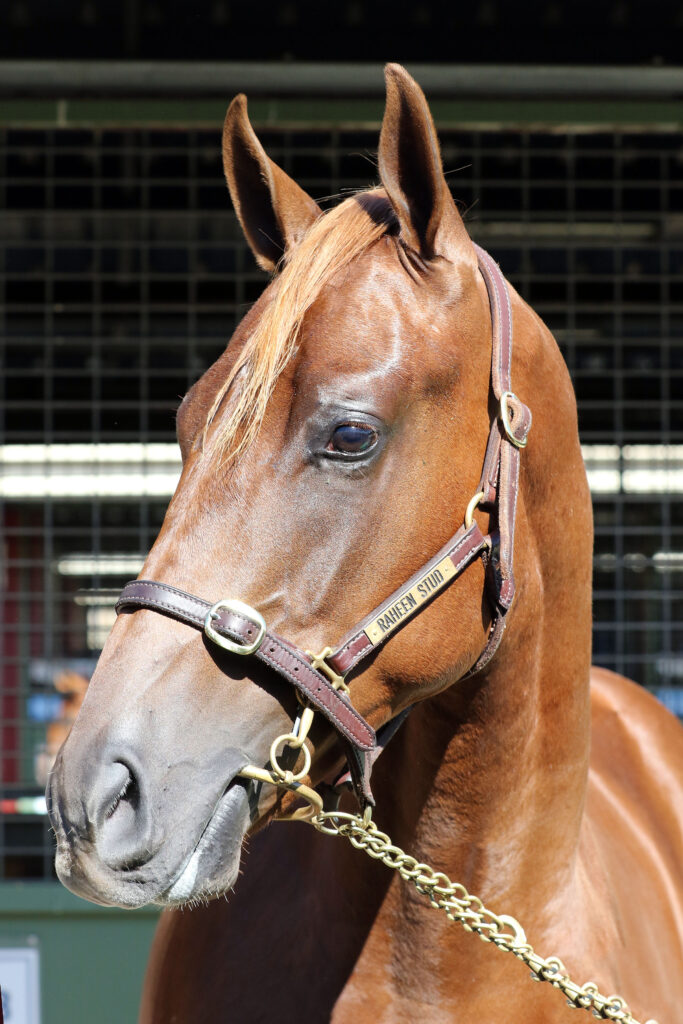 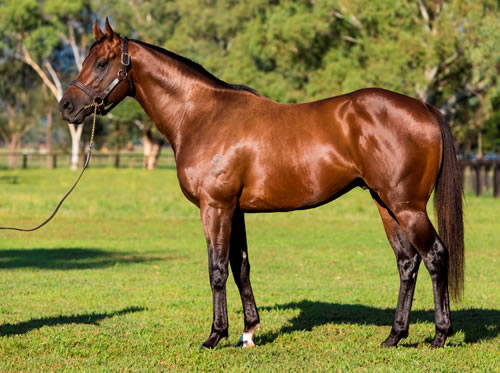 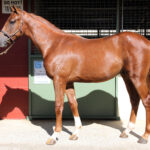 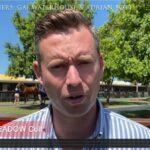 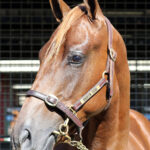 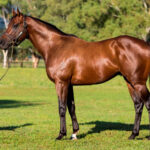 This is one impressive looking colt, purchased from the well regarded Raheen Stud at the Magic Million Gold Coast. We could not believe our luck in securing him for such outstanding value. He was also rated highly by well-regarded bloodstock agent, Sheamus Mills. Above all he was personally selected by Gai Waterhouse and Adrian Bott.

Gai Waterhouse and Adrian Bott (trainer) comments: Gai and I are excited to secure the Zoustar colt in partnership with Blueblood. It’s a sale that we have had great success with securing precocious and forward  types of horses. Just like Unite And Conquer was very successful for us at the Wyong Magic Millions Listed race. This is also a particular colt that I can see us getting back to those races. A nice raw forward individual. Very well built, strong forward type as I said. I love the way that he carries himself, and used himself. Very athletic type of horse and I also very much look forward to training him for Blueblood.

Sheamus Mills (bloodstock agent) comments: here we are with a smooth moving Zoustar colt. He’s out of a Redoute’s Choice mare, no better broodmare sire in the country, by a top, top stallion in Zoustar. The thing that really grabbed me about this horse is his movement. He’s above all a lovely moving horse, lovely masculine head, plenty of depth of girth, he really uses his hind quarter. I think he’s a really nice prospect.

David Mourad (BBT Racing Manager) comments: another lovely colt by Zoustar, chestnut colt out of the metropolitan mare, Meadow. Bought him in partnership with Gai Waterhouse and Adrian Bott. A colt that was high on their list. Our bloodstock agent, Sheamus Mills also quite liked the horse. Very neat type, good knees, knitted up in the knees, good sign of an early runner. I think he’s going to continue to furnish, what you see now is not the finished product. He’s got a lot of spunk about him. Spunky walk and good signs for an early running 2YO.

Our Zoustar colt is back in pre-training at Doran Park with Gordan Pratt after completing a full preparation at Gai Waterhouse and Adrian Botts Randwick stables.

This colt is closely related to 8 individual stakes winners. He also has a Goldmine rating of 20/20. There are 13 Individual Group 1 winners bred on the same pattern including, SUNLIGHT, ENGLISH and MANHATTAN RAIN.

Our Zoustar colt has passed 100% clean on his scope, x-ray and clinical examination.

ZOUSTAR is from Australia’s two dominant stallions of the past decade, ENCOSTA DE LAGO and REDOUTE’S CHOICE which combine in the pedigree of this brilliant sprinter.

“He was that good, I could of prepared him for the Golden Slipper however given I thought he was bred to be at his best at Three we were happy to wait. What he did achieve at Two was just a glimpse of his natural ability. An equine machine.” Chris Waller.

MEADOW by REDOUTES CHOICE. This is her second foal. She is the daughter of STAWBERRY FIELD a 3-time winner 1 at 2. A listed winner and 4th in the Queen of the turf Group 1. MEADOW is also the half-sister to SUPERCARE a 3-time winner 2 at 2 placed in a Group 2.

REDOUTES CHOICE broodmare sire of 17 Group 1 winners. He has had 112 individual black type winners and earnings over $187 million including KEMENTARI, D’ARGENTINO and INFERENCE.

By far Gai’s greatest achievements have been recorded in the best races of the year in both Melbourne and Sydney. Gai has also won Sydney’s two best races, the Golden Slipper and Doncaster Handicap six and seven times respectively. Gai is by far the most successful trainer ever in the Sydney Spring. ‘Make hay while the sun shines’ is a phrase one often can hear Gai quoting. This attitude is reflected by Gai’s results in the best races contested during the Sydney Spring Carnival. The Flight Stakes (7 wins), the Epsom Handicap (7 wins) and the Metropolitan Handicap (8 wins) have become races at the mercy of Gai each and every year.

Above all Gai will gives each and every horse that comes into her care every possible chance to succeed. Only six horses in the history of Sydney racing have won the two-year-old Triple Crown and Gai has trained two of them (Dance Hero 2004 and Pierro 2012). Gai in fact has won more Group One races for two-year-olds than any other trainer.